This test will help with the diagnosis and management of progesterone deficiency in women. It will assess your symptoms and provide you with a series of action steps to assist you in managing these.

Non-cancerous growths or lumps of muscle tissue that form within the walls of the uterus.

Fibroids are usually benign (non-cancerous) smooth muscle tumors which occur in the womb (uterus). They are also referred to as leiomyoma, leiomyomata, or myoma. Fibroids usually occur in groups; it is uncommon to have just one fibroid tumor. They can grow inside the uterus, within its walls, or on its outer surface. Fibroids are the major cause of hysterectomies (removal of the womb).

Fibroid growth is associated with too much estradiol, the most active form of estrogen hormone produced by the ovaries, and too little progesterone. This hormonal imbalance is most common during perimenopause, which takes place from age 35 to 50 in most women.

Fibroids occur in about 50 per cent of women. Many women will go through life not even knowing that they have fibroids as they do not commonly cause symptoms.

Progesterone deficiency or estrogen dominance during reproductive the years results in fibroid development and growth. Fibroids diminish in size with declining estrogen levels at menopause.

Untreated fibroids will continue to grow under the influence of estrogen dominance.

Next page: Symptoms of Fibroids

Although 50% of all women may have fibroids, only 30% have pain due to fibroids. Symptoms of fibroids include:

Many fibroids are slow-growing, so symptoms may not develop until a woman is over 35, especially when the fibroids have enlarged to the same size as a three-month pregnancy – enough to interfere with menstruation and fertility.

Only 1 woman in 1,000 who has fibroids develops leiomyosarcoma, which is cancer of the muscle layer of the uterus. Affected women average 58 years old. It is extremely rare for younger women to develop cancer in conjunction with fibroids. Clues that you may have leiomyosarcoma are very quickly growing fibroids and postmenopausal bleeding. If you were diagnosed with fibroids before menopause and experience vaginal bleeding after your periods have stopped for at least 12 consecutive months, then see your doctor as soon as possible.

Next page: Causes of Fibroids

Fibroids may be genetic; if women in your family have fibroids, you are more likely to have them, too. Fibroid growth is associated with too much estradiol, the most active form of estrogen hormone produced by the ovaries, and too little progesterone. This hormonal imbalance is most common during perimenopause, which takes place from age 35 to 50 in most women. The reproductive systems of perimenopausal women are winding down towards the end of their childbearing years:

Fibroid tumors occur in approximately 30% of all women, and in 40% of women over 35 years of age. Fibroids are more prevalent among Black women, affecting up to 50% of them.

Fibroids often co-occur with aggressive kidney tumors in women of European descent who have a mutated Fumarate Hydratase Gene.

Usually found during a gynaecological exam, ultrasound, hysteroscopy, laparoscopy, or during surgical procedures for other conditions.

Secondary Consideration: Fertility probably affects less than three per cent of women. In very rare instances, a fibroid may become cancerous and is called a sarcoma.

Next page: Treatment for Fibroids

If your fibroids cause no symptoms (are asymptomatic), then your doctor will probably adopt a course of watchful waiting. That means measuring the fibroids once every six months to their detect growth, and asking you if your periods have changed. Your doctor will probably advise you to leave your fibroids alone until they exceed 2.5 cm in size (less than one inch), or if they start to produce symptoms that degrade your quality of life.

If your fibroids are large, they pressurize your other internal organs, so you should give serious consideration to their removal if they are symptomatic.

Next page: Further Information about Fibroids 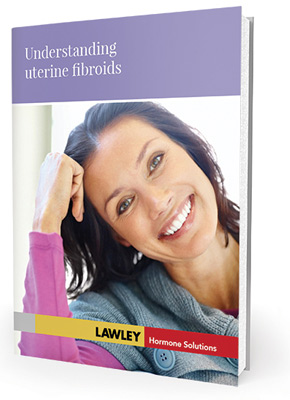 Downloading our booklets is FREE.

Topics discussed in the Understanding Uterine Fibroids booklet include: